The RB-2 of 1924, claimed to be the world's first freight aeroplane. Following the loss of the RB-1 No 1 in 1923, that machine's Galloway Atlantic engines and single-wheel main undercarriage units were apparently installed in the RB-1 No 2, which had its original, fabric covered wings replaced by new units covered in corrugated duralumin, making the RB-2 a completely metal covered aircraft. Its fuselage contained an 18ft x14ft passenger cabin capable of accommodating 25 passengers in "parlour car" comfort, there being ample standup headroom. Alternatively, the RB-2 could be converted to carry 6,000lb of freight, plus a crew of three.


Weights for the RB-2 are quoted in tons! Grossing out at about nine tons, the aeroplane weighed five tons empty. This demanded too much from the engines, for the performance was hardly sprightly; the maximum speed was around 110 m.p.h., and the cruise some 20 m.p.h. less. However, what it lacked in speed the RB-2 made up for in other respects. It was claimed that because the lifting fuselage accounted for around 50 per cent of the total lift, the wings were of 30 per cent less span than comparable aeroplanes carrying the same weight. Fuel consumption was also claimed to be 20 per cent less than comparable craft, and sufficient could be carried for 36hr flying. The RB-2 was demonstrated at Curtiss Field, and also before the Army Air Corps at Mitchell Field, Long
Island, on August 7/8, 1924, when it reached an altitude of 4,200ft in the hands of Burnelli pilot Romer Weyant and Navy pilot Lt George Pond. The following year the RB-2 demonstrated its load-carrying capabilities ina spectacular fashion when Hudson Motors used the aeroplane to carry anEssex auto on an aerial sales tour. Automobile producers in America arenot known for small cars, and the RB-2 was capable of carrying two! Vincent Burnelli used the above as his sales pitch, and all subsequent Burnelli types incorporated all these features. It is reported that the RB-2 was fitted with more powerful engines at this time, probably 650 h.p. Rolls Royce Condors, it is doubtful whether it
would have carried such a load with its original power plant. The aircraft was later sold to the Aerial Transport Company, with whom it flew freight for eight years before finally being scrapped for its metal. The RB-2 was Burnelli's last biplane to embody his lifting fuselage principle; all subsequent designs being monoplanes. 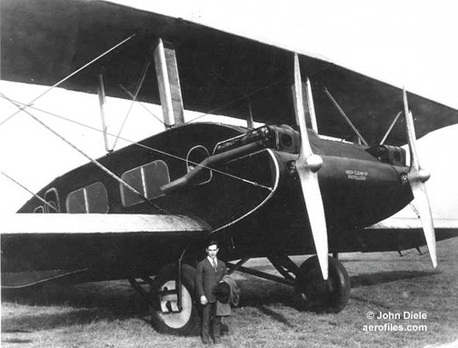 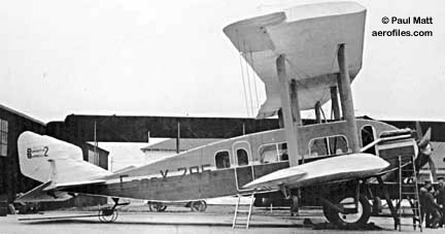