THE RUMBLE IN THE JUNGLE

Famous chemist, John James Johnson, has just discovered Formula X (what it is no one but Johnson knows, but given his reputation it must be worth a lot of money). Leaving his secret laboratory in the Amazon Jungle, his plane went down in bad weather in a little explored part of the jungle. Just before it crashed the pilot radioed his position. This message was picked up by the Master, Professor White, Bureau 13, and the man employing mRACHAM, Private Dick.

SOUTH END OF THE TABLE 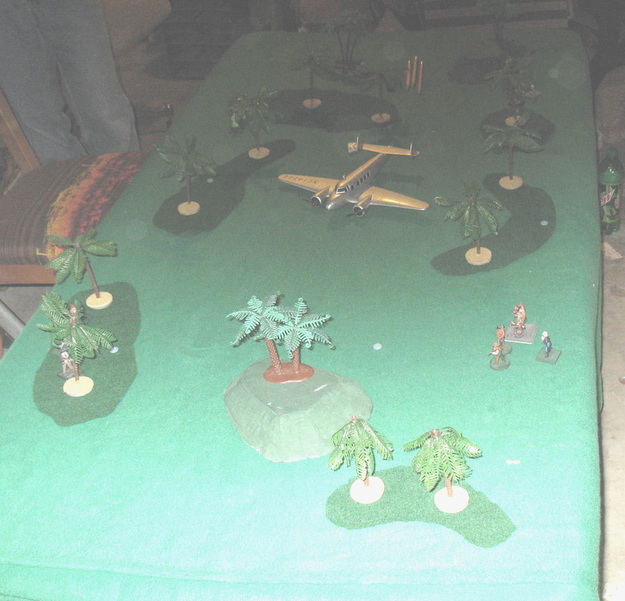 The four teams just happen to arrive at the same time near the crashed airplane (what a coincidence!!!).  Marcham, Private Dick and Agent 9 entered the southern part of the clearing, on the left and Agent 9 on the right. Sorry about the picture, but I couldn't figure out how to take a good picture of the entire table with the bad lighting in the basement.

NORTH END OF THE TABLE 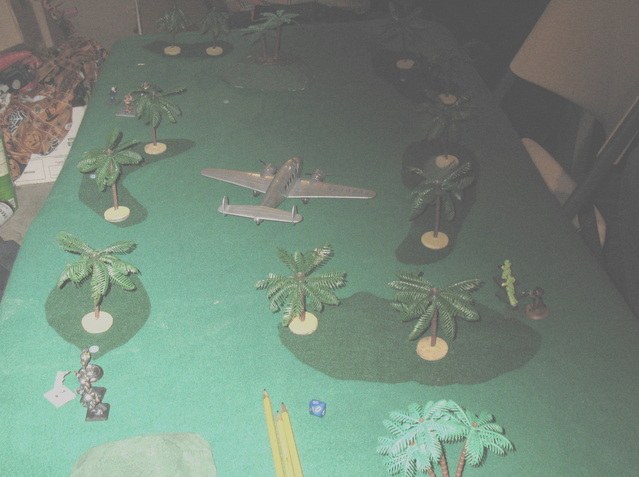 Professor White entered the board from the right in the north as did the Master on the left. 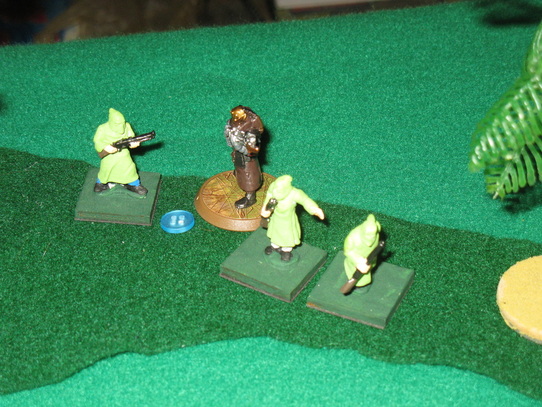 The first two turns saw little conflict between the parties. Marcham, Private Dick found a pit trap at his first dare location (the blue buttons), but successfully kept out of it. Agent 9 and his men (or whatever Agnew is) found the upper half of a pilot (who had obviously been bitten in half in one bite). The Master and his demented followers discovered a briefcase handcuffed to a severed arm. On closer examination, the arm was found to wear a wristwatch bearing the initials JJJ and the briefcase was obviously booby-trapped, only the correct key could open it safely. 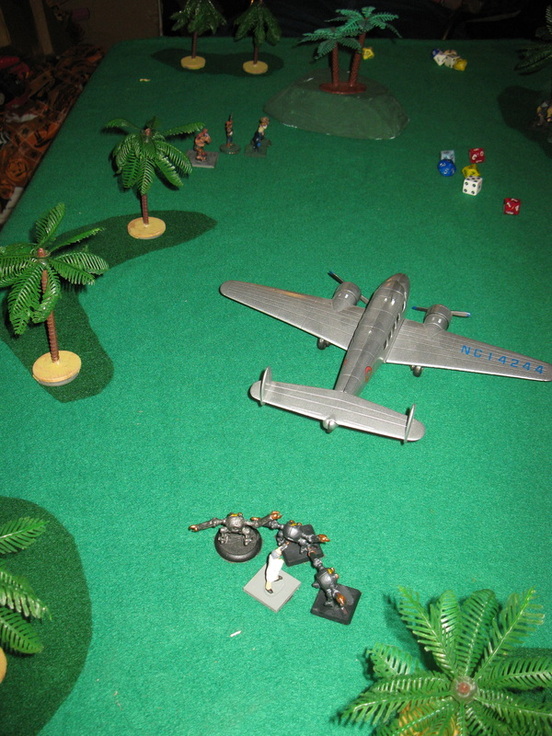 Ignoring the nearby Dare location, Professor White moved towards the plane, guarded by his metal minions. A couple long ranged shots from Agent 9’s team sent him scurrying back out of sight. 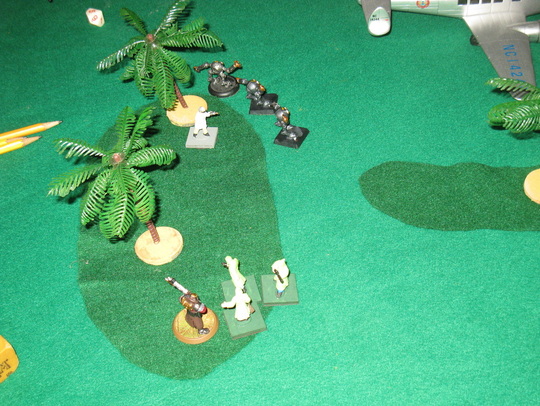 The next few turns saw the teams working their way through patches of jungle or running from cover to cover. The Master and his flunkies briefly shared a patch of jungle with the Professor, who promptly ran to another patch. I used my standard rule that you have to be on the very edge of a piece of forest or jungle (the dark green cloth) to see out or be seen. If both sides are inside the same piece of woods they can see six inches. It's not a rule in the game but it's easier than trying to place a figure on a stand behind a tree on a stand. 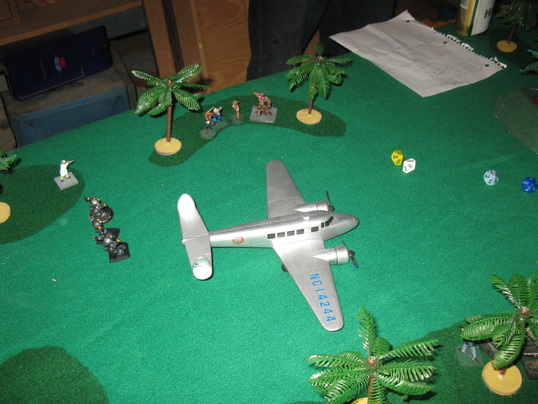 Three of the teams moved into position around the crashed airplane. Agent 9 and his men on one side, Marcham Private Dick's team on the other, and Professor White and his metal men coming up from the rear of the plane. In the two turns it took for them to get into position, they all kept hearing a bloodcurdling roar, what could it be? 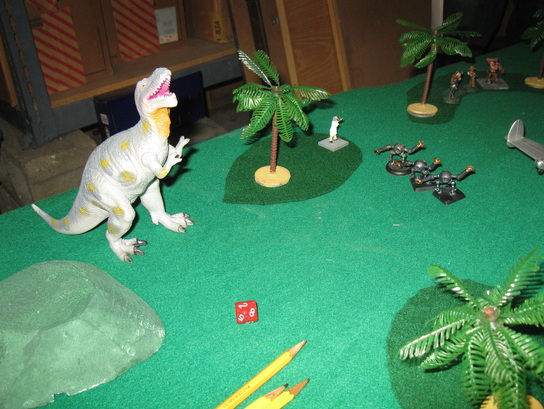 It was the dreaded yellow-spotted Tyrannosaurus Rex (I really need to get around to repainting my plastic dinos) who burst from the jungle emitting a terrible roar (sufficient for the Professor to wet himself - ie failed a moxie test). 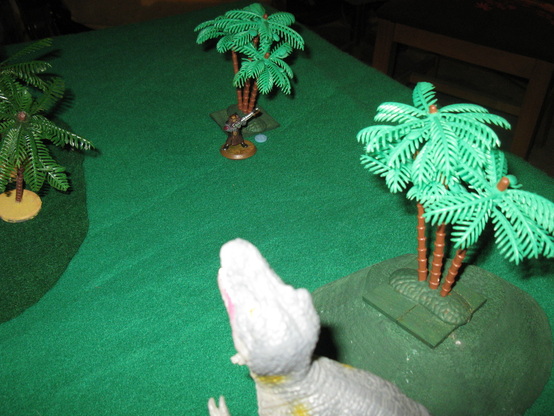 Unfortunately for the Master, he had chosen that point to rush out of the jungle to check on a Dare location in the open (which turned out to be a huge pile of dung- I wonder whose). With everyone else hidden in jungle the monster had the choice between the robots and the Master. Guess who he chose? 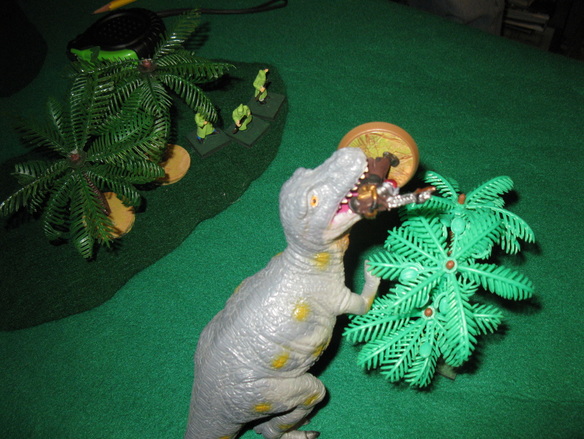 Despite a face full of gas from the Master's gasgun and a wild volley of shots from his henchmen, the two met in hand-to-hand (OK bayonet-to-fang) combat. Because of a tie on initiative both attacked at the same time. The Master scored two wounding hits (the first ignored as a special ability for such creatures) while the dino scored four wounding bites, Good-bye Mr. Master. 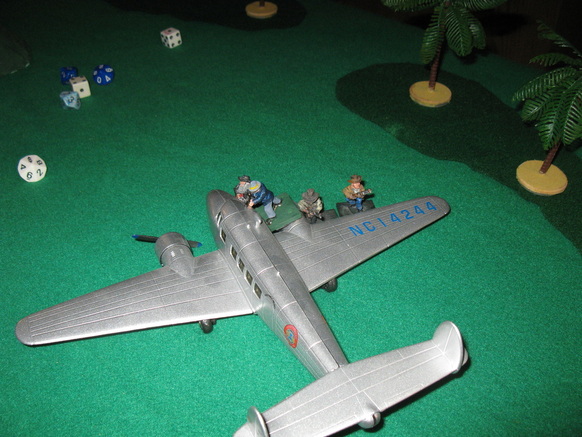 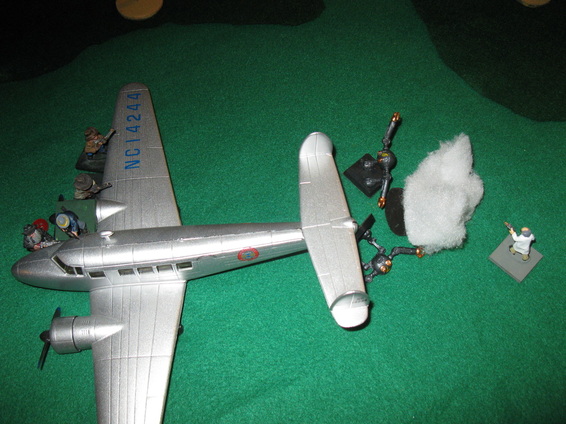 The Professor and his robots approached the plane again, and walked into a hail of gunfire from Marcham and his men. This caused one robot to explode and another to be knocked out of commission. 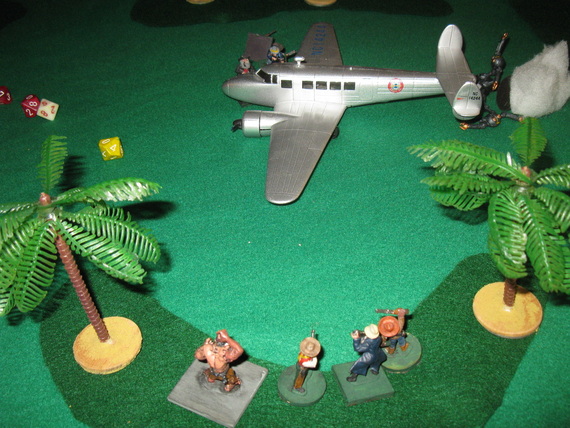 Agent 9 and his men took this opportunity to fire on Marcham and his men, killing one flunky. 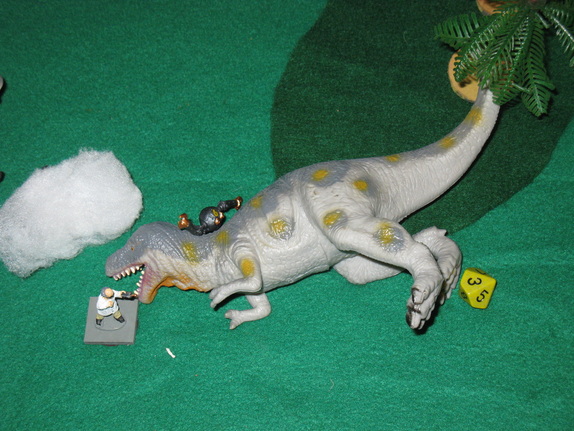 Meanwhile the Tyrannosaurus Rex (remember him?) decided to charge Professor White. Bad move. White missed with his Snap Shooting but he and his robot both beat the big guy in melee. The Professor put one psitol shot right in an eye (rolled a 1 on doing damage - which does two wounds instead of one) while good old Number 6 ripped out some tender bits with its pinchers. Three wounds were enough to drop the already wounded monster. Hip Hip Hurray for Evil Professor White and Robot #6. 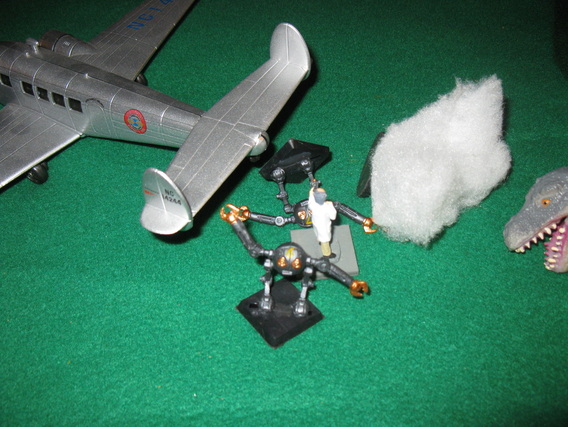 Desperately needing another working robot, the Professor tried to fix the one that had gone out of commission (I let him try to restart the robot with a Hard Dare test, he was afterall the creator of these robots) while loyal Number 6 stood guard. 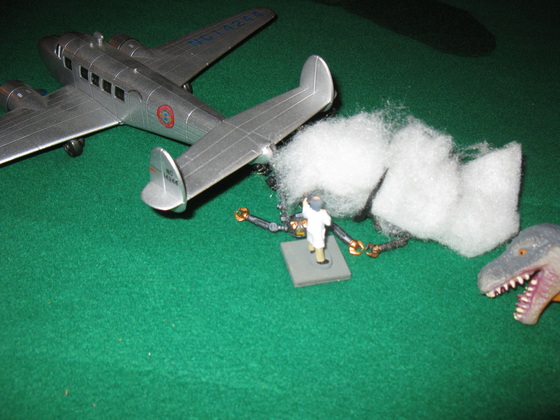 Well, that was a waste of time. Since the Marcham, Private Dick, ran off with his men and a set of keys he had found, Agent 9 and his men turned their fire on the Professor. Not only did the damaged robot not restart, but Good Old Number 6 exploded due to a hit. 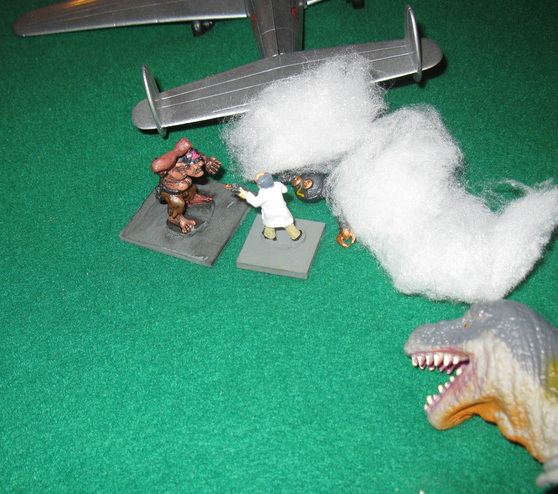 Seeing his opportunity, the monstrous Agnew (who hadn't done much all game but growl menacingly) charged the Professor. It would be an easy kill for Agnew with his Cast Iron Arm skill. 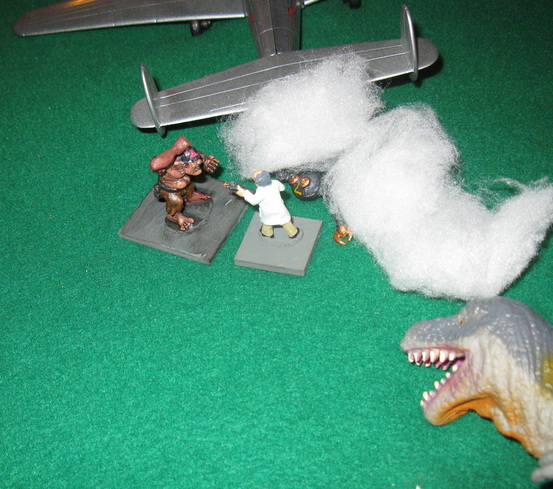 Mind you, if you roll a badly enough, a +5 initiative (+2 for charging, +3 for Cast Iron Arm) doesn't do any good. Once again the Professor fired a deadly shot (another 1 on the damage die which does 2 wounds when using a pistol in hand to hand combat) and dropped poor old Agnew (maybe having  an exposed brain wasn't the best idea).
After Agent 9 and his men gunned down Professor White and the Cultists fled with the briefcase (still attached to the severed arm). the Game ended.

All Marcham, Private Dick, got a good story to tell (rolled Copasetic on the chart).

Agent 9 gained some points for a new Schtick (skill).

Agnew took a wound to the arm that lowers his Fists for next game.

The Professor also took and arm wound (-1 to Gats) while the Master was wounded in the leg (may not move more than 6 inches per turn next game). How did the Master survive the attack by the Tyrannosaurus Rex? Evidently he was swallowed whole and made his way out (ala Dr. Rick Marshall in the recent Land of the Lost movie).

Where Heroes Dare is a great game, except when it comes to Mad Science. It's never worth the points. The Rocket Pack fail 10% of the time when used, as do the Rayguns. And if they fail there is A 50% CHANCE THEY BLOW UP. So 1 in 20 times they are used, they are dangerous to the users. And you know how gaming is, if it can be rolled it will be (The Atlantic Wall Syndrome). The professor's robots cost 111 points each (50 points for the robot, 40 points for -4 AP, and 21 points for Fists of 8). For that many points you might as well buy a couple of flunkies with rifles and get a better return for your points. I know I am mini-maxing but what fun is it to have a great device that regularly fails. It would be like rolling every turn for breakdown on your Panther and Tiger tanks (which both had major mechanical problems). Therefore I propose the following...

This lead or companion is so knowledgable about the workings of Mad Science that his weird equipment doesn't break down as badly (-2 to the roll on the Mad Science Table). This only applies to the equipment he uses, not equipment used by others on the same team.